Before the computing era, ILM was the master of oil matte painting, making audiences believe that some of the sets in the original Star Wars and Indiana Jones trilogy were real when they weren't. They were the work of geniuses like Chris Evans, Mike Pangrazio, Frank Ordaz, Harrison Ellenshaw, and Ralph McQuarrie.

Matte paintings are fake sets that—most of the times—used to be made with plexiglass and oil paint. The artists used oversized panels to create the necessary detail that the camera needed to fool the audiences when the film was projected over the large surface of the cinema screen. The paintings were combined with live action filmed to match the perspective of the painting. If done well, the public would totally buy into the shot.

Replaced by digital matte paintings and 3D imagery, nowadays films don't use oil paint matte paintings anymore. The last major example was this shot of the Carpathia in Titanic, which was created by Chris Evans:

Born in 1954 in Bremerton, Washington, Chris Evans has created matte paintings for many iconic movies. Among them The Empire Strikes Back, Return of the Jedi, Indiana Jones and the Temple of Doom, Titanic, Willow, The Curious Case of Benjamin Button, and The Green Mile.

Mike Pangrazio didn't have experience before joining ILM, so Ralph McQuarrie—the master himself—taught him how to do it over three years. One of his first jobs was the tractor beam matte in the first Star Wars.

He was responsible for setting up many key scenes in the history of cinema, most significantly the iconic final scene of Raiders of the Lost Ark, where a government official pushes the Ark down an aisle surrounded by thousands of crates. He now works for Weta Digital as art director. He also designed the current Walt Disney logo opening sequence.

After starting his career as a technical illustrator for Boeing and animating the Apollo program coverage for CBS, legendary Academy Award Winner Ralph McQuarrie was the genius creative force behind the entire Star Wars films. In fact, many of his original concept art has served as the inspiration for the new JJ Abrams Star Wars film. During his long career, he did other seminal work, like designing the original Battlestar Galactica series and the spaceships forClose Encounters of the Third Kind and E.T.

With McQuarrie and Pangrazio, Harrison Ellenshaw was the third matte painter for the original Star Wars. He worked on A New Hope and "oversaw the matte department on The Empire Strikes Backat George Lucas' premier effects facility, ILM. He went on to work for Disney in movies like Tron and The Black Hole, which got him and his father nominated for an Academy Award. 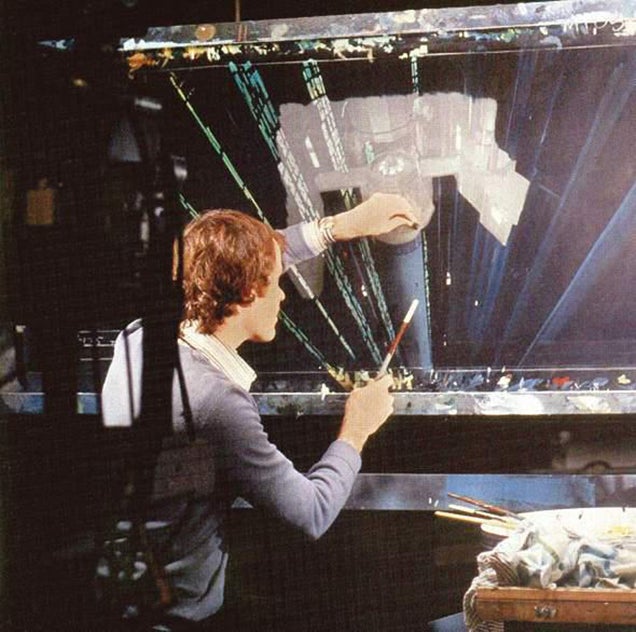 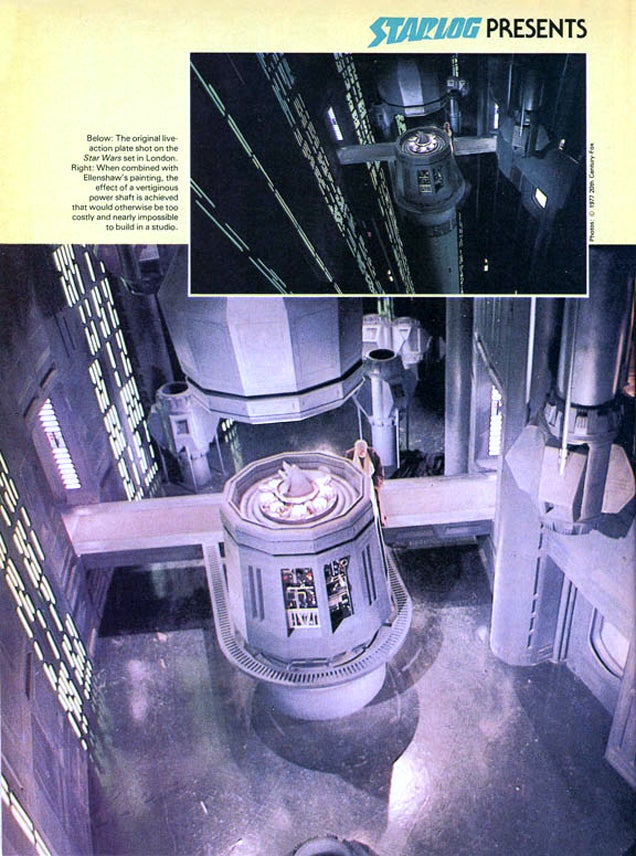 Here's an image of Ellenshaw, McQuarrie, and Pangrazio taken during The Empire Strikes Back.

Frank Ordaz says that 'he knew he was an artist by the time he was 7 years old.

At 10 I was studying with a portrait master by the name of Theodore N. Lukits. I was also mentored by notable California Plein Air artist Sam Hyde Harris who was friends with Norman Rockwell. I grew up with stories by 2 men who were born in the 1800's. By the time I graduated Art Center College of Design I was already painting for the movie industry and was hired by George Lucas's company ILM. My first assignment was to paint a background establishing shot for ET. Spielberg liked it and my career took off. 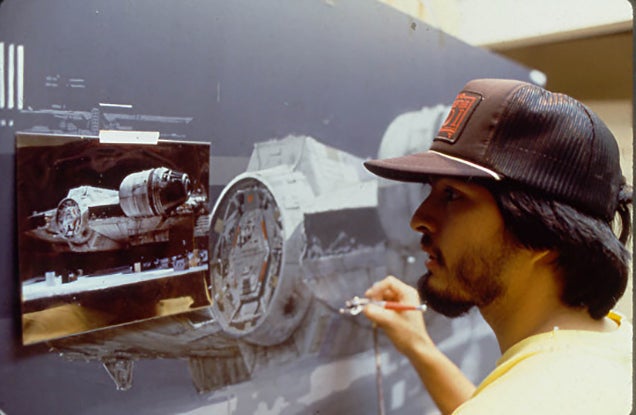 My matte painting covers the pylons the hold up the skiffs that oppose each other. Even Lando is painted in this shot where Luke jumps from right to left.

Some of these paintings were made by other artists)

I totally thought that door was a set :-(

Chris Evans, Michael Pangrazio, Frank Ordaz, Harrison Ellenshaw, and Ralph McQuarrieworked in several movies through their careers. Their handmade art and the work of their colleagues made us dream of impossible worlds and fantastic places across Earth and the Universe.